Minneapolis Camden Realtor Derrick Monroe welcomes you to the premier site for Minneapolis homes for sale in the Weber-Camden community.  Camden is conveniently located near downtown Minneapolis with excellent freeway access to anywhere in the metro area.  Read more about Camden MN real estate and the community…

About the Camden Community

Weber-Camden has both industrial zones and single family homes.  One of the most well known features of the area is Webber Park which also links to the Mississippi River.  Schools in the Webber-Camden area include Patrick Henry High School and many elementary schools nearby.  The residents of the neighborhood really love the diverse nature Weber-Camden offers.

Homes for Sale in Camden

The Camden Minneapolis area contains many neighborhoods within the community such as McKinley, Folwell, Cleveland, Victory, Lind-Bohanon, Shingle Creek and Weber-Camden. 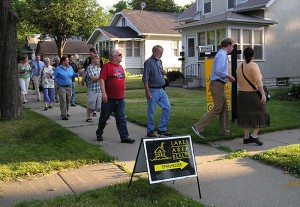 Shingle Creek is a neighborhood within the Camden community and is located in the far northwest corner of Minneapolis.  The neighborhood got its name from the creek that runs through it.  Homes in the Shingle Creek neighborhood are mainly 50’s style era and larger one-and-a-half story homes.

Cleveland extends from Dowling Avenue North to Lowry Ave in the south and from Penn Avenue in the east to Xerxes Avenue — the border between the city of Minneapolis and the city of Robbinsdale — to the west.  Named after Grover Cleveland, twice President of the United States, the neighborhood consists mainly of single family homes with a touch of commercial at the corner of Penn and Lowry.  Homes in the Cleveland community are generally lower than the average Minneapolis priced home.

McKinley is home to about 3,600 residents who love the areas many parks and businesses that cater to families making McKinley a great neighborhood to put down roots.  Many of the homes in the Mckinley community are two-story, single-family homes with wood frames; bungalows and some small stucco Tudors.  Most of the houses were built between 1910 and 1930.  Perkins Hill is the main neighborhood Park.

Victory is well known for its east access to the popular Theodore Wirth Park.  Earning its name from Victory Memorial Parkway, Victory is home to about 5,000 residents.

Folwell is located in the community of Camden in the northwestern portion of Minneapolis.  The Folwell Neighborhood Association is very active, encouraging home ownership and responsibility in the neighborhood, a first time home buyers loan program, assistance with repairs and renovation, and programs for homeowners who take particular care with their homes’ appearance.  The association also runs a volunteer organization that will help elderly and low income residents with exterior renovations.

Lind-Bohanon is home to about 4,400 residents who enjoy community amenities such as the Bohanon Park, the North Mississippi Regional Park and the paths of the Grand Rounds Scenic Byway.

If you’re looking to buy a house in the Camden community, contact one of our Camden Realtors today at 612-282-SOLD (7653) or use the contact button on this page.