About the Powderhorn Community 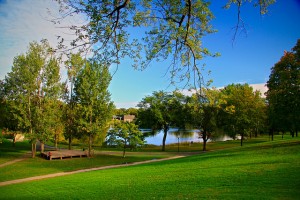 classes ranging from pottery to yoga.  Powderhorn’s lake and park are used as the setting for the city’s May Day Parade which occurs on the first Sunday of May.  Other enjoyable activities in the Powderhorn community are; The Powderhorn Art Fair, the Powderhorn Community Center and Powderhorn Park.  The residents host a community gathering each month where they share food and conversation.  Part of their annual line-up is a cookie and ornament exchange as well as an ice cream social over the summer. According to the 2010 census 8,655 people are proud to call Powderhorn their home.

The neighborhood area was incorporated by the City in 1887, and by 1930 it was fully developed.  Today it is a residential neighborhood with mostly single-family dwellings, interspersed with multifamily buildings mainly in its northwestern quadrant.  Bryant neighborhood was named for William Cullen Bryant, who was an American poet who lived from 1794 to 1878.

Powderhorn Park is mainly a residential neighborhood, where single-family houses and narrow residential lots are prevalent.  The neighborhood was annexed by the City in 1887 and most of the housing was built by 1920.

The neighborhood is predominantly residential, with a large percentage (about 36 percent) of land in parcels occupied by multifamily residential uses.  Commercial uses tend to concentrate along Lake Street.  The Lyndale neighborhood has one of the highest populations of artists in the nation.

This is a residential neighborhood that is experiencing great growth.

Named in honor of William Wilson Corcoran (1793-1889), who founded the Corcoran Gallery of Art in Washington D.C., this is a mainly residential neighborhood — more than 60 percent of the land is used for single-family residences.  The light-rail stop at Lake Street gives the neighborhood an easy connection to Downtown, the Minneapolis-St. Paul International Airport and the Mall of America.

Home to about 7,000 residents Standish is a mainly residential neighborhood.  The new light-rail train line along the Hiawatha Avenue corridor connects the neighborhood with downtown, the Minneapolis-St. Paul International Airport and Mall of America.  New homes are now being built along this corridor.

So when is the best time to sell a home in Minnesota anyway? Most people would automatically think summer when asked this …

It's super confusing if you're searching the MLS homes for sale or someones web site, we get it. The MLS verbiage started gaining …