The community of Calhoun-Isles is home to several smaller neighborhoods in the city of Minneapolis.  Homes in Calhoun-Isles range from multi-million dollar estates to old world charm neighborhoods.  The Lake Calhoun area is well known for its fine dining and fabulous nightlife.  Read more about the Calhoun-Isles neighborhood below…

Homes for Sale in Calhoun-Isles

Calhoun-Isles contains the largest concentration of upscale homes in Minneapolis and anchors a major American cultural center.  Wonderful neighborhood business districts can be 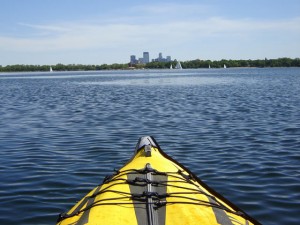 This upscale region consists of residential neighborhoods and business areas situated around Lake Calhoun, Lake of the Isles, Lake Harriet and Cedar Lake.  The lakes are connected both by water – via channels that pass under gracious curved bridges – and by land, providing a multitude of recreational opportunities.  The many channels allow non-motorized boats, swimmers and windsurfers to travel from one lake to another quite easily, while bicyclists, joggers, walkers, and rollerbladers enjoy the extensive network of paths winding through the lush open space surrounding the lakes.  In the winter, the lakes are cleared of snow for ice-skating and ice fishing. Cross-country skiing on the paths is another popular winter activity.

Bryn Mawr in Welsh means “big hill,” and some of the early investors in the neighborhood were from Bryn Mawr in Pennsylvania. Residents in this neighborhood tend to be professionals or executives, many of whom work out of their homes.

Lowry Hill is named for Thomas Lowry, one of the original residents and developers of the area.  The neighborhood hosts the Walker Art Center and Minneapolis Sculpture Garden.

Because of its roughly triangular shape, Lowry Hills East is sometimes called “the Wedge.”  Lowry Hill East began its life as a community in the 1880s with the arrival of Thomas Lowry’s public transportation system, the horse-drawn streetcar line.  Lowry Hill East has a diversity of housing ranging from elegant turn-of-the-century residences to large, modern apartment buildings.  Many of the larger homes have become converted to multiple-unit housing. Amenities in and near the neighborhood include proximity to downtown and a variety of shops, restaurants, food markets, service businesses and nearby cultural attractions. Lowry Hills neighborhood is known to have some of the finest homes in Minneapolis.

Homes in Kenwood Minneapolis include Victorian, Tudor and Regency style homes that have been lovingly renovated and restored over the years.  The neighborhood contains many open spaces including these two lakes, trails, parks and playgrounds.  Cedar Lake Trail parallels the Burlington Northern tracks on the north.  Kenilworth Trail runs from north to south and is part of the Chain of Lakes byway.  The Kenwood trail ends at the Grand Rounds trail that partly follows the shores of Lake of the Isles.  Kenwood’s parks attract skaters in winter, and walkers and joggers use the nearly three miles of trails around Lake of the Isles year-round.

The Cedar-Isles-Dean neighborhood is located on the very western edge of the city of Minneapolis.  It takes its name from Cedar Lake, Lake of the Isles, and Dean Parkway, which was named in honor of A. J. Dean, one of its donors in 1892.

East Isles neighborhood is located on the east side of Lake of the Isles, in the Minneapolis Chain of Lakes area.

The neighborhood is in the heart of Uptown and is in walking distance of Lake Calhoun.  CARAG is well established with three-fourths of its homes built before 1920.  The neighborhood is also home to a strong mix of service and retail businesses, as well as four churches and a synagogue.

– Lake Calhoun, one of Minneapolis’ most popular attractions, is at the neighborhood’s western border.  A wide variety of amenities are located in and around East Calhoun including shops, restaurants, night clubs, movie theaters, coffee shops and grocery stores.  The housing mix includes apartment buildings, duplexes and single-family homes that were built mostly around the turn of the 20th century.